By Digital Nomads HubSeptember 23, 2018 No Comments

Every investor makes mistakes from time to time. It’s simply part of the learning process. That’s why smart investors regularly look back at their investing history to find lessons that can help them avoid making the same mistakes in the future.

I recently went through this exercise and found it to be very informative. Here’s a look at my five biggest investing blunders and the key lessons that I’ve learned from each of them.

I didn’t know much about investing when I started buying stocks in 2004. At the time I only had a few hundred dollars to work with, so I figured that penny stocks were the only way to go. My logic was that I could buy hundreds of shares of a stock so long as it traded for under $1, but only one or two shares if it traded for more than $100.

Sadly, I couldn’t tell you a thing about the companies that I purchased early on beyond their share price. How much cash did they have in the bank? Was their management team trustworthy? What was the addressable market opportunity for the products? I couldn’t answer any of these questions. The only thing I focused on was the share price.

You can imagine what happened next. Every single stock that I bought went down by at least 25%, some by much more. I ended up calling it quits after a few months and sold them all.

I’ve since learned that it doesn’t matter how many shares of a stock you own; what matters is how much capital you have invested in any given company, and the quality of the company you buy. The price of a single share is irrelevant.

Thankfully, I’ve since learned this lesson so well that my portfolio is chock-full of many “expensive” companies that trade for more than $100 per share today, and it’s devoid of those trading for less than $10.

When I first learned about dividends, I became extremely excited. I had no idea that some companies actually made cash payments to their shareholders. That fact caused me to search for the highest-yielding stocks I could find.

I began by using free online stock screeners to scan the market for companies with the highest yield possible. I quickly found some businesses that offered up a dividend yield of 15%, 18%, and even 22%. Buying them was obviously a no-brainer decision, right?

It turns out that my natural instincts were (once again) dead wrong. Many of the stocks I purchased not only stopped paying their dividends, but their share prices went down, too! That was a double-whammy that taught me that an above-average dividend yield is actually a warning sign.

I no longer seek out dividend-paying stocks specifically, but when I do find one that interests me, I make sure to put it through a rigorous test to ensure that the dividend is sustainable and will continue to be paid. If it fails my test, I’m content to ignore it and move on.

Many investors are familiar with the phrase “buy low, sell high.” If you follow this maxim, then you can be tempted to sell your winning stocks quickly so you can “lock in your gains.”

A look back at my own trading history shows that I followed this idea for far too long. I made a little bit of money on many stocks and quickly looked to cash in. I wound up selling Altria Group at $18, PayChex at $25, Insulet at $17, Microsoft at $24, Ebix at $20, and SodaStream at $43.

If you’ve followed any of these businesses over the long term, you know that they are all currently trading far higher than the prices at which I sold them. I’d be far richer today if I had simply decided to hang on.

The big lesson I learned is that winners tend to keep on winning. Just because a stock has already gone up a lot doesn’t mean it can’t continue to soar. That’s why I’ve since become extremely reluctant to sell a great business even if I’ve already made a bundle.

I’d always heard that using options was a risky strategy, but after reading up on the subject, I found out that they can actually be used to reduce risk. That fact excited me, so I started to dabble with them.

Unfortunately, I had a lot of success with options early on, which caused me to get cocky. I wound up making a bone-headed decision that came with a five-figure price tag.

In 2014, I become very interested in an energy pipeline company business called Kinder Morgan (NYSE:KMI). I liked that the company made money by moving oil and gas from one place to another, and it didn’t really matter what happened to the price of underlying commodities. The company’s revenue was also protected by take-or-pay contracts, so I believed the business was very low-risk. What’s more, management had a track record of value creation and was calling for 10% profit growth for the foreseeable future.

I was so confident in Kinder Morgan’s growth potential that I decided to leverage my returns by using a very bullish options strategy called a synthetic long in addition to my substantial ownership position. I figured I’d make a bundle as the stock slowly continued to rise.

Anyone who follows the oil and gas space closely knows what happened next. The energy markets collapsed, and Kinder Morgan’s customers suddenly couldn’t pay their bills. It didn’t matter that they had signed contracts with Kinder Morgan; what mattered was that they were hurting, badly.

Wall Street proceeded to freak out, and Kinder Morgan’s stock sank like a stone. My losses were magnified by the fact that I used options to supplement my stock position. I’m still unwinding my bullish Kinder Morgan option position to this day.

As painful as this experience has been, I’ve learned my lesson: Avoid leverage at all costs, even when an investment is a “sure thing.”

5. Getting scared away by valuation

Of all the lessons I’ve learned, this one has been the most costly by far.

In 2006, the company I was working for chose salesforce.com (NYSE:CRM) as our customer relationship management software vendor. Our business quickly became heavily dependent on Salesforce.com for all of our marketing, customer support, and sales functions. In fact, if Salesforce.com ever went down, our commercial team would literally come to a standstill.

I was so wowed by the company’s platform and our dependence on it that I looked into buying shares. However, I quickly learned that the stock sported a P/E ratio of well over 100, so I immediately dismissed the company as “too expensive.”

Here’s what has happened to the company’s stock since I decided to pass: 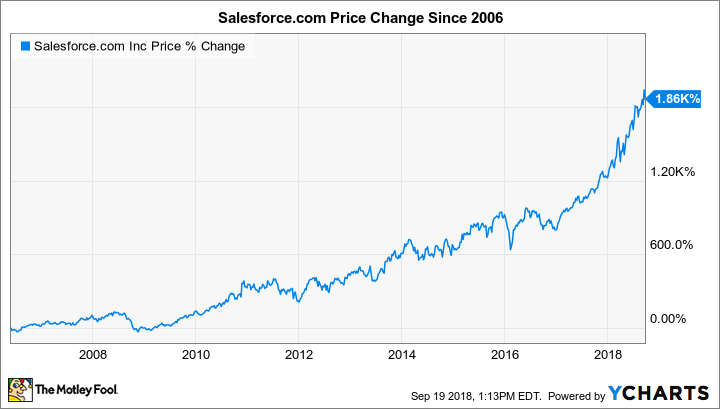 If I had just held my nose and bought a few shares anyway, I’d be sitting on a 19-bagger — and counting. That would have been enough to turn a small amount of money into life-changing wealth.

I’d love to say that I quickly learned my lesson, but sadly, I’ve made this mistake numerous times. I took a pass at buying some of the greatest businesses of our time — think Amazon, Intuitive Surgical, Netflix, and Alphabet — just because I didn’t like the valuation at the time.

Thankfully, Motley Fool co-founder David Gardner has since instilled in me that you need to ignore short-term valuation when you are buying great companies.

I’m happy to report that I did end up learning this lesson in 2010, and I’ve since purchased all of the businesses listed above. In each case, I’ve already earned multibagger returns on my investments, but I’d be far richer today had I learned this lesson earlier.

Learn from my mistakes

To keep myself from making these same mistakes twice, I’ve since developed an extensive checklist that I put all of my companies through before I make a buy or sell decision. I also make use of an investing journal to document what I’m thinking and feeling before I make any serious decisions.

I’ve found that making use of both of these tools has greatly increased my accuracy rate and has enabled me to avoid making the same mistakes twice.