Nouriel Roubini Sounds off on Cryptocurrencies in Senate Hearing

By Digital Nomads HubOctober 13, 2018 No Comments

Noted economist Nouriel Roubini sounded off on virtual currency and blockchain in a recent Senate hearing. The NYU professor classified cryptocurrency as a big scam and a bubble.

Prominent economist Nouriel Roubini is one of the few who accurately predicted the 2008 financial crisis.

Currently a professor at the New York University Stern School of Business, Roubini has been a notable and colorful critic of cryptocurrency and blockchain technology. He made a number of passionate arguments against both at a recent hearing on Capital Hill on October 11th.

The hearing was titled “Exploring the Cryptocurrency and Blockchain Ecosystem.”

Roubini was invited to speak at the hearing in front of the Senate Committee on Banking, Housing and Community affairs alongside Peter Van Valkenburgh, who is the Director of Research at CoinCenter. The economist made several scathing comments while giving his prepared testimony in front of Senators.

Roubini referred to cryptocurrency as the “mother of father of all scams and bubbles,” and noted how ICOs serve little purpose “other than to skirt securities laws.”

In his prepared testimony, Roubini made a point to tell Senators that he was a leading figure “on the topic of bubbles and their bust and the causes and consequences of financial crises.”

After a brief introduction, Roubini wasted no time harshly criticizing Bitcoin and other cryptocurrencies.

He said towards the latter months of 2017, “scammers, swindlers, criminals, charlatans, inside whales, and carnival barkers” took “clueless retail investors” for a ride as they enticed them to buy assets at their peak “that then went into a bust and crash.”

According to Roubini, all of “crypto-currency land has now gone into a crypto-apocalypse” as the prices of Bitcoin and other leading cryptocurrencies have fallen dramatically since late last year.

Roubini made a point to say that any cryptocurrencies should be a “serviceable unit of account, means of payment, and a stable store of value” in order to be a currency. He maintained digital currencies did not meet any of these metrics.

He did not spare blockchain in his remarks, characterizing it as the “new refuge of the crypto scoundrels” now since the “crypto bloodbath is in full view.”

Roubini remarked that blockchain tech is “nothing better than a glorified spreadsheet or database.” 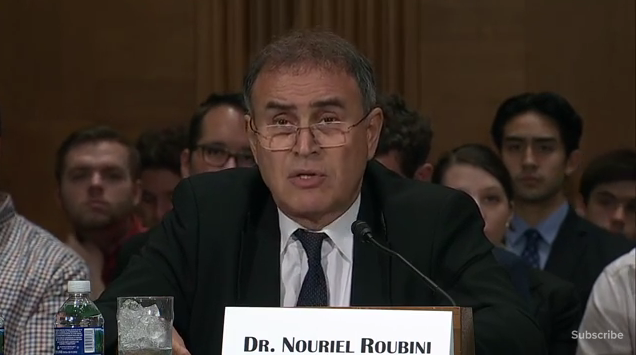 Towards the end of his prepared remarks, the economist maintained he has “no conflict of interest” since he does not have any investments or financial interest in the space. Rather, all he said was at stake concerning his commentary is “my personal, intellectual and academic reputation.”

Remaining Resolute In His Beliefs

Roubini has not slowed down on sharing his beliefs since the hearing concluded. On October 12th, he Tweeted out how he “already smashed” Etherum co-founder Joseph Lubin in a debate in front of Lubin’s supporters. In the same Tweet, Roubini said that he would debate “any senior crypto guru.”

I already smashed @ethereumJoseph in front of his entourage of 500 of his supporters. Do watch that debate here:https://t.co/quRTslZrrV
So be my guest. I will debate any senior crypto guru. https://t.co/YbeJiAsDI8

Just a couple of hours later, Roubini Tweeted noting that Iran has joined the “Club of Rogue States trying to use crypto to avoid sanctions and oppress their people more.”

First Venezuela, now Iran. Welcome to the Club of Rogue States trying to use crypto to avoid sanctions and oppress their people more. Guess which other rogue nations will join…

What do you think about Roubini’s firey commentary in front of the Senate? Let us know in the comments below!