Hit enter to search or ESC to close
TravelTravel Hacking

How to ‘Travel Hack’ Around the World

By Digital Nomads HubSeptember 10, 2018 No Comments

Twentysomethings Hannah and Chad Janis just quit their jobs to depart on an adventure around the world. They booked their 40-country, $62,000 trip with a classic travel hack — ‘free’ airline points.

Fresh out of college last year, Chad Janis found a job as a banker in New York City. He hacked his first free flight to JFK for the interview.

Chad knows personal finance, and his job paid well. So he and his wife, Hannah, have a little cushion. But they also have an idea that they think is worth spreading: Buy less, do more. Or at least try to travel hack your next adventure.

Travel hacking is essentially collecting frequent flyer miles (or points) in the most rapid manner possible to fly for free. The easiest way to earn airline points quickly is through the signup bonus you get when opening a credit card.

For example, Barclays Red Aviator card gives you 60,000 American Airlines points after swiping the card one time. It sounds easy. But Chad studied and experimented with travel hacking extensively over the last five years to figure it out, some 20 hours a week beyond his day job.

He started small by seeing how many single vacation destinations he could get to for free. He flew to Mexico, Italy, France, South Africa, Switzerland, and Iceland — for nothing.

Then, they kicked things up a notch. Eventually, the couple systematically opened 26 credit cards and accumulated over 2 million points, documenting the whole experience online for others to follow.

In theory, the premise of a travel hack is pretty straightforward. “We hit the minimum spend on each of our cards to activate signup bonuses ranging from 30,000 to 100,000 points by simply planning ahead of time what our expected expenses would be in the near-term future,” Chad said.

It’s the details that make it a potentially onerous side hustle.

Frequent Flier Miles: Keeping Track of It All

The Janises’ own travel hacking led to building the web-based premium app Wall Street Minimalist, which has since morphed into a side business. It includes a free flight search engine, a video course, and a tracking system to help others travel hack easier.

The app was a result of trying to manage cards and minimum spend data through a Google spreadsheet, which Chad said was difficult.

“You still have to be responsible with paying off your balances and closing credit cards before annual fees roll around,” he explained. “So the app is just meant to help you track all of the moving parts and information.”

Timing is another struggle. Travel hackers must open and close credit cards at the right time for their best rates.

“You never know whether a bank is going to raise or lower their signup bonus offer,” Chad said. “You also have to be wary of certain rules that each bank has to restrict individuals like us from opening and closing too many cards.”

For example, Chase only allows you to open five cards in a 24-month period.

“Obviously, their rules are only so effective, though, as we were still able to hack our way to over 2 million points. However, for someone who is just taking a couple of trips each year, these rules aren’t very applicable, as they will never be restricted by them.”

What About Credit Scores? 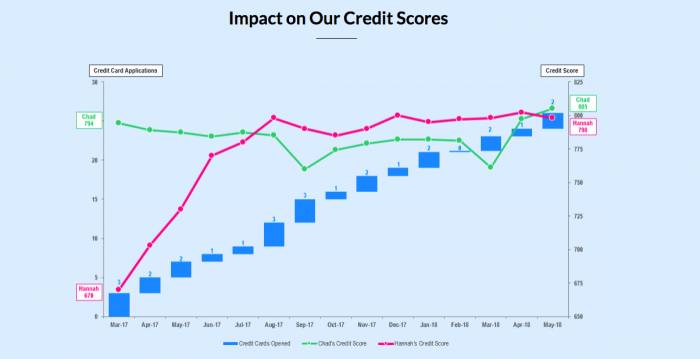 What may be most surprising to those new to travel hacking is that the Janises simultaneously boosted their credit scores. They managed to build Hannah’s credit so she could open more cards while keeping Chad’s credit intact the way most of us were taught: paying credit cards on time and never carrying a balance.

But with 26 pieces of plastic, that requires some serious organizational skills. “When you have so many credit cards, it’s important to develop an autopay system so you never have to worry about missing payments,” he said.

“If you’re good about living within your means and never spending more than you have in the bank, you can use credit cards instead of cash to quickly build up enough points to redeem for your next free flight.”

That means to start small, like with your next flight to somewhere cool. 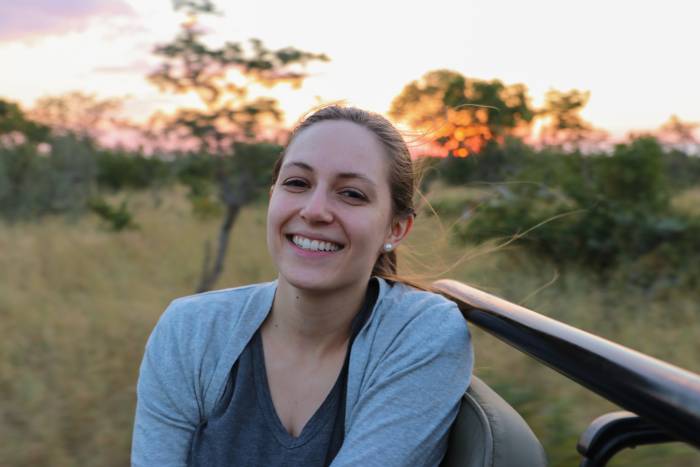 Chad and Hannah know money doesn’t grow on trees. They live within their means. “We never went on any spending rampages to rack up points, and we’ve never had credit card debt,” Chad said.

“We saved up money over the last year by living intentionally as minimalists. For the trip, we’ll cover our food and activities using the cash we saved. However, without our points, we never would have been in a position to afford this.”

For their global journey, which starts next week, the Janises booked the majority of flights with Singapore Airlines, which has a Star Alliance Round The World Award. The business-class program costs 240,000 points per person. The cash value of the couple’s flights to 40 countries is around $62,000, according to Chad.

“We used the points we earned with other airlines through our cards’ signup bonuses to book ancillary tickets such as our flight from Auckland, New Zealand, to Vava’u, Tonga,” he said.

Free hotel stays are another perk of a credit card travel hack. Chad said he still has several hundred thousand points he can apply to hotel stays. He’s already redeemed some abroad, including a free, all-inclusive weeklong splurge at Marriott’s Fiji Momi Bay.

Because after all that work, the Janises deserve some vacay. Check out a handy list of their travel hacks below.

10 Steps for Your First Travel Hack

Finally, celebrate. You just saved anywhere from $300 to $1,500 on an expensive flight. “I can’t think of a better reason to relax on the beach sipping a pina colada,” Chad told GearJunkie.

Associate editor Julie Kailus has spent a career covering people, places, and products in the outdoor industry. Julie can be found testing the latest and greatest in her favorite activities — trail running, mountain biking, swimming, snowboarding, and the underrated endurance sport of chasing two sons around the mountains.