By Digital Nomads HubJanuary 23, 2020 No Comments

Corsair’s been in the peripheral game for a long time, and it’s made a lot of gaming headsets over the years. Released in September of last year, the Corsair HS60 Pro Surround is on the simpler side, but it covers the fundamentals and includes occasionally important features like surround sound. Find out what frequency response is and how it applies to your sound and music.

Does it stick the landing?

What’s in the box

Not a lot of extras with this one.

There isn’t much in the box with the Corsair HS60 Pro Surround. There’s a small USB adapter, detachable mic, and foam mic tip, and that’s about it.

How is the Corsair HS60 Pro Surround in use?

Simplicity is the name of the game with this headset. The Corsair HS60 Pro Surround doesn’t cater to the gamer looking for every bell, whistle, and doodad under the sun—this is for someone who needs an audio solution you can just plug in and use. And in that regard: it’s pretty damn good.

The HS60 Pro Surround is a solidly built gaming headset, with a lightweight metal frame and big leatherette ear pads. The headband sports studded leather cushion and clamps down with just the right amount of force. The headphones sit on hinges that allow for a significant amount of tilt, meaning this headset will fit comfortably on most head shapes. 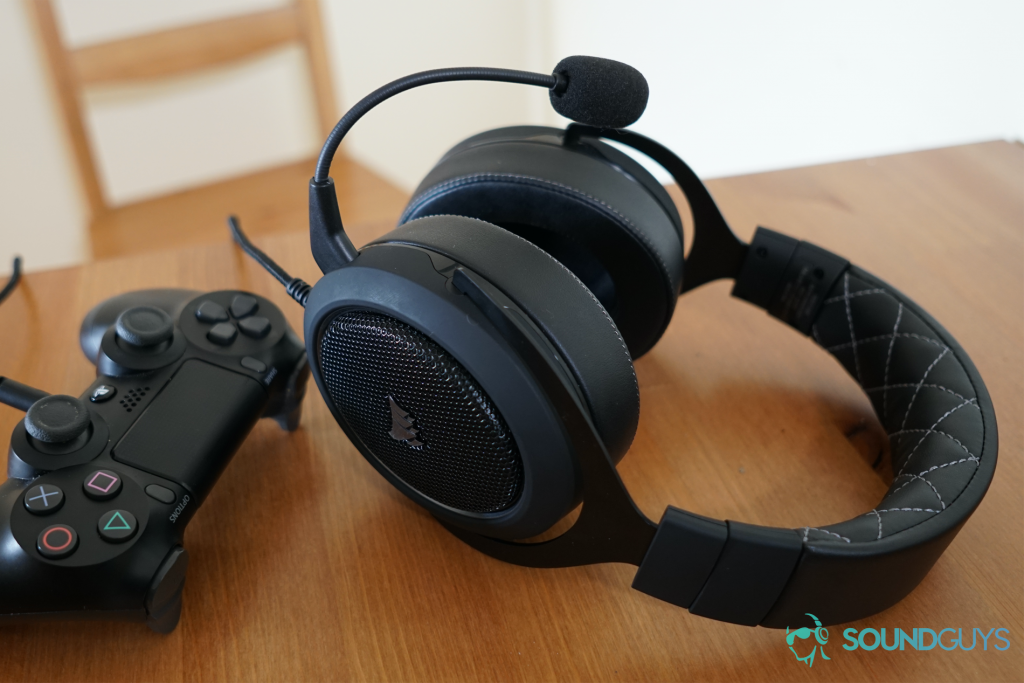 This is a pretty platform agnostic headset.

In short, this is basically the opposite of the Corsair Void Elite—I was never worried about the headset moving or falling off my head. Achieving a decent seal was easy, though gamers with glasses might struggle a bit more due to the leatherette. Corsair lists replacement pads on its website, but actually finding them for sale (and in non-leatherette varieties) is a little tricky.

However, actually using the Corsair HS60 Pro Surround is a pretty painless experience. Just plug it in and it works. If you want to use the surround sound feature, you’ll need to install Corsair’s iCue software, which is a little obnoxious, but quick enough. Once the setting is switched on, you can safely ignore the app forever if you want—it adds very little additional functionality, and surround sound will stay on unless you decide to open the app again and turn it off. 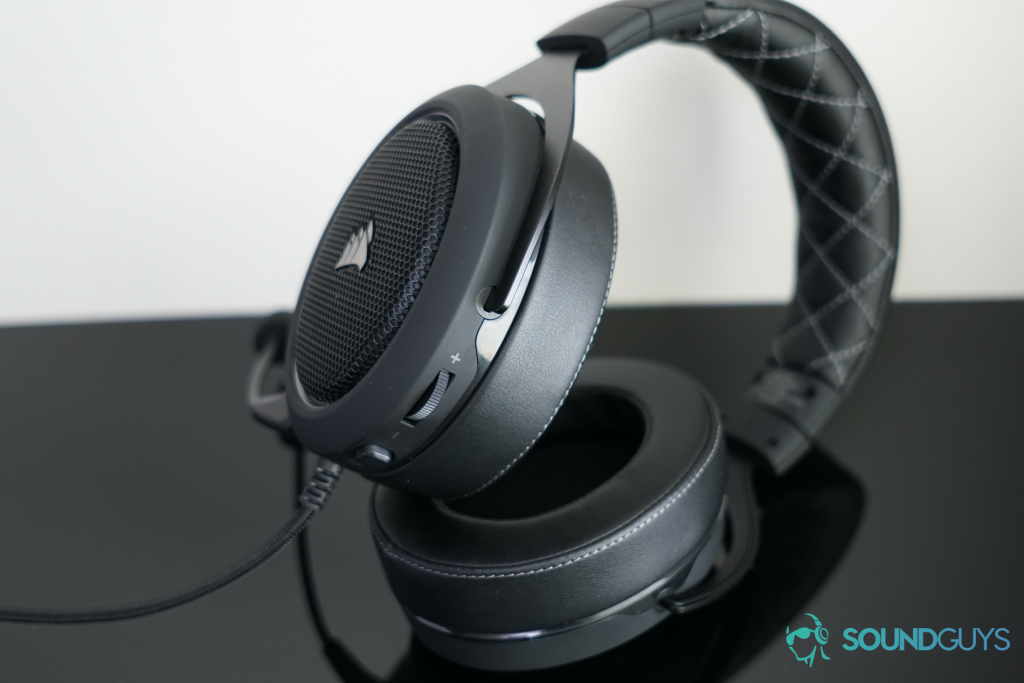 There’s not a lot going with the Corsair HS60 Pro Surround’s on-ear controls, which makes them easy to find in the middle of a game.

The headset’s on-ear controls are similarly straightforward; there’s a volume dial on the left ear and a mic mute button beneath it, and that’s it. The detachable 3.5mm mic also works pretty well. This unidirectional microphone sits at the end of a flexible wire, so adjusting it to your desired position is really easy. If you’re gaming on a Nintendo Switch, or just don’t want voice chat you can easily get rid of it.

Using the microphone over Discord I never ran into any issues. In fact, the people I spoke to barely noticed a difference when I turned on the program’s various voice improvement features. 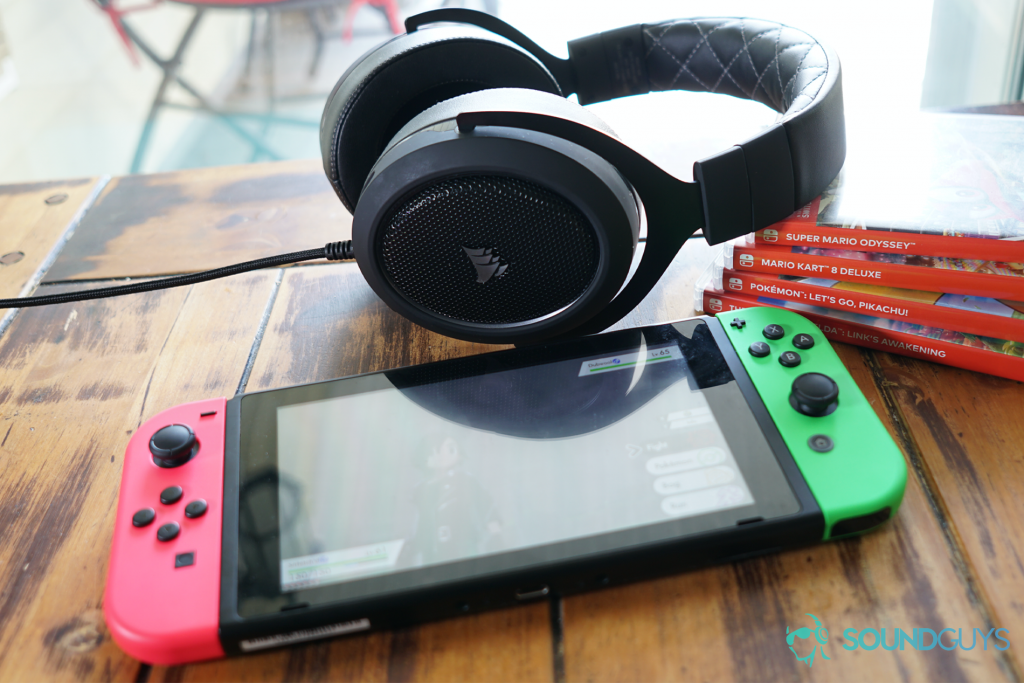 The mic won’t work for games other than Fortnite and Warframe, unless you buy an additional splitter.

Just like everything else about the headset, gaming with the Corsair HS60 Pro Surround is a very straightforward experience. I tested the headset on PC, Playstation 4, and Nintendo Switch (it’s compatible with Xbox One too, I just don’t own one), playing games like Overwatch, League of Legends, Dauntless, and Pokemon Sword and found it handled all of them equally well.

The surround sound feature worked well, and I found it pretty useful during matches in Overwatch and when trying to track down a behemoth in Dauntless. Unfortunately, it’s only available on PC, so I was stuck with stereo sound when I tried booting up Dauntless there. Nonetheless, non-surround sound gaming was solid. I found the headset was comfortable to wear for extended stretches, whether at my desk or on my couch.

How does the Corsair HS60 Pro Surround sound? 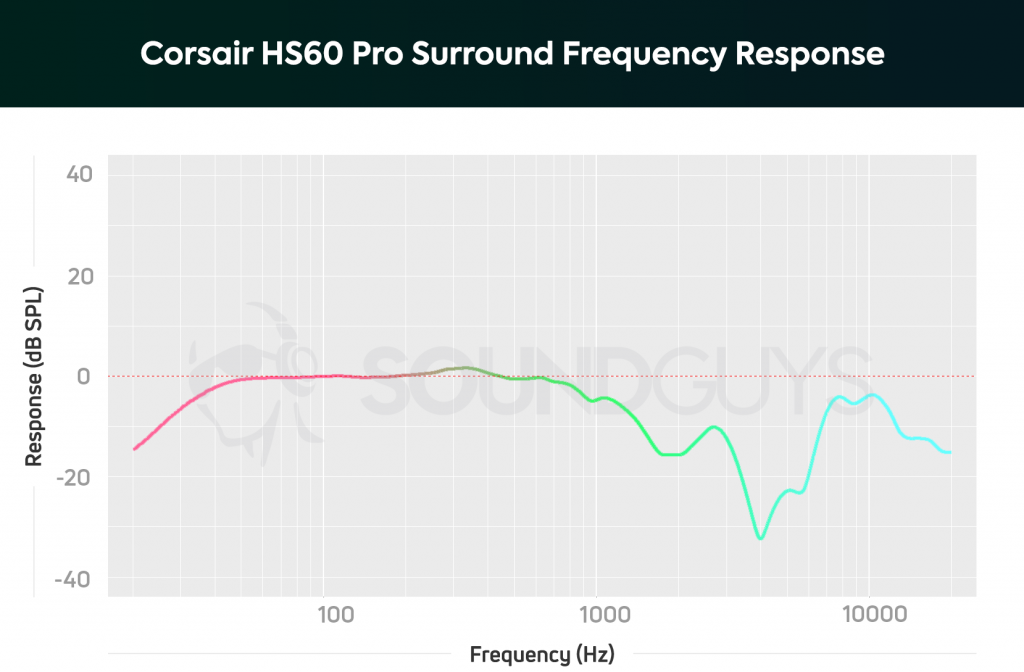 The drop off in the highs is pretty intense.

The Corsair HS60 Pro Surround has audio output pretty typical of a gaming headset—for better and worse. There’s a pretty notable de-emphasis in both the mids and highs. Sounds around 2000Hz will be three times quieter than they should be.

What this means in game is explosions, which are already almost always tuned to be the loudest part of a given scene will be that much louder, mainly due to the underemphasis in the mids and highs. The under-emphasis in the mids is particularly worth paying attention to if you play games like Fortnite or Overwatch, where audio cues like footsteps and voice lines can give you hints at enemy locations and behaviour.

Most speech occupies the mid range, with the exception of things like sibilant sounds (F, S, and SH sounds), which are rather high frequency. Even accurate bass output will sound louder because of this.

If you’re listening to music, this kind of output can be totally fine for electronic or house beats, but maybe not for a lot of other genres. In Reborn by Magic Sword, the booming bass that already dominates the song really takes over and sounds great. With music that favors bass a little less, you might find less to be excited about. The underemphasized mids and highs mean the sounds of vocals, strings, and some cymbals will be harder to pick out among more prominent bass parts. 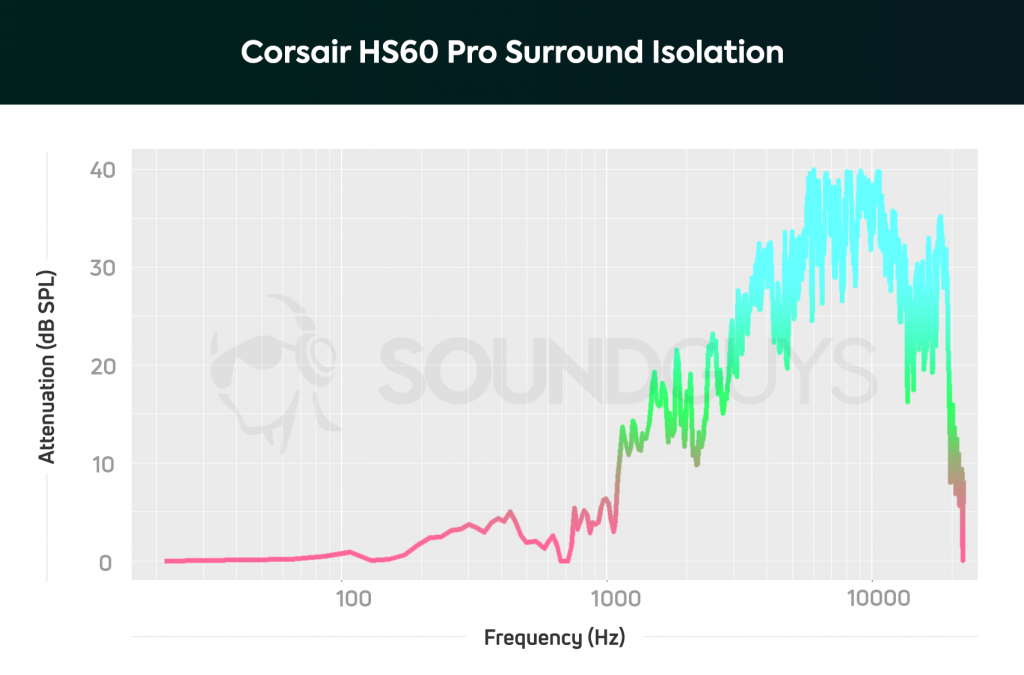 The Corsair HS60 Pro Surround offers very good isolation for gaming headset. There’s nothing approaching ANC here, but the thick earpads and easy adjustment of the headphones make getting a good seal very easy. You shouldn’t have any trouble from the typical noises of the home wearing this gaming headset—just don’t expect it to fair all that well outside.

How good is the microphone? 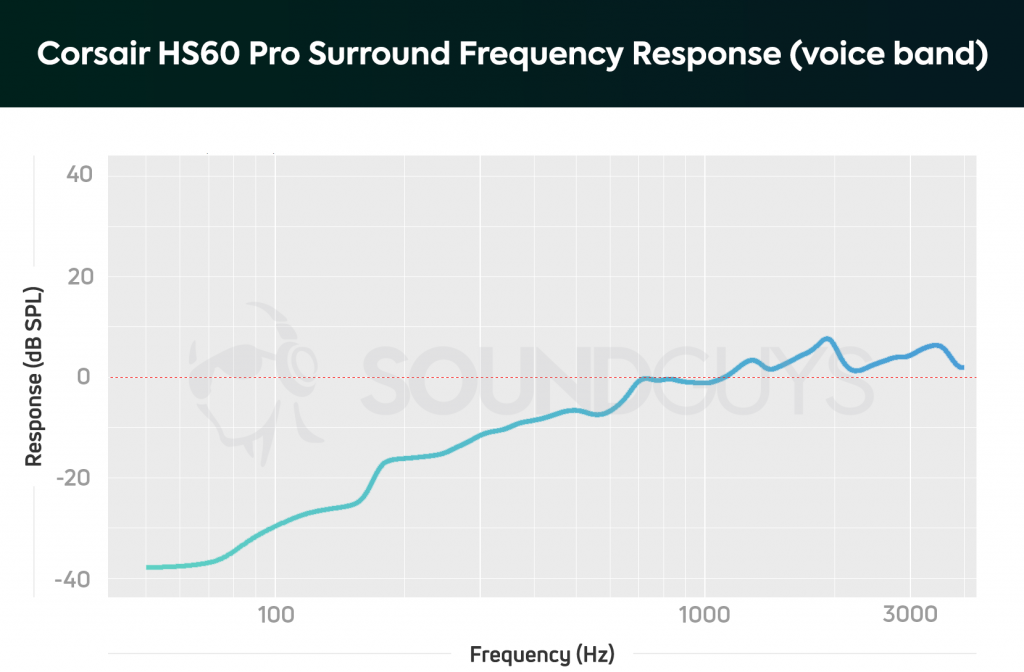 Much like the headphone frequency response chart, the HS60 Pro Surround’s microphone features very typical audio output for an attached microphone. There’s a pretty significant de-emphasis in the bass range, which is often due to the microphone not getting enough power, and reasonably accurate output in the mids and highs.

This means people with deeper voices may sound a little distorted using this microphone. People with higher voices shouldn’t have any issue though. Unfortunately, there were no microphone options of any kind in the iCue app—if installing it is already necessary to fully use the headset, having useful features like this wouldn’t hurt. Despite that, I never ran into any particularly glaring clarity issues—listen for yourself:

Should you buy the Corsair HS60 Pro Surround?

If you’re looking for something decent that won’t threaten the budget, maybe. 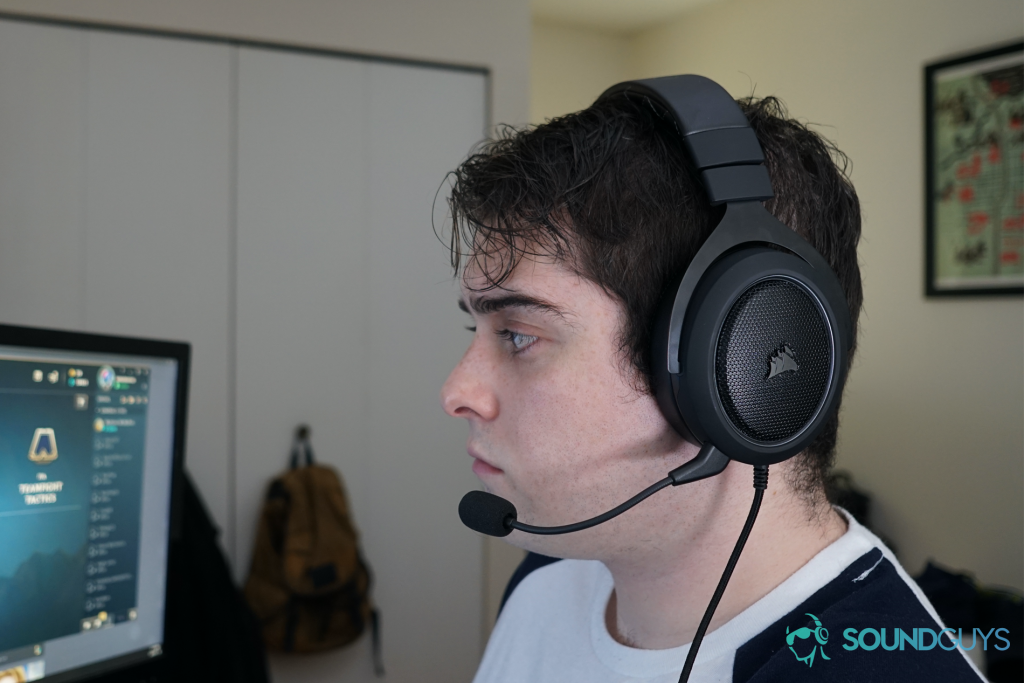 The sound may be just okay, but this is a very comfortable headset.

The Corsair HS60 Pro Surround isn’t an exceptional gaming headset, but it is a solid one. It’s well built, it sounds fine, and it works well on everything. There’s not a whole lot more to say about this one. The inclusion of surround sound means it’ll cover most of your PC gaming needs without an issue. If you’re looking for something a little more console-focused, the SteelSeries Arctis 1 Wireless offers fantastic sound, a good mic, and USB-C connectivity (don’t worry there’s a dongle)—plus it’s wireless and has great battery life.

To be sure, there are headsets with better sound, headsets with more features, and headsets at lower prices than the HS60 Pro Surround. But if you just want something simple for a reasonable price, you could do far worse than this.

Disclosure: We may receive affiliate compensation in connection with your purchase of products via links on this page. Even though we may receive compensation, we always give our honest opinions, findings, beliefs, or experiences on each product. See our ethics policy for more details.

With HR supporting remote employees, IT steps up to fill technical gaps