3 Stocks That Could Make You Rich — The Motley Fool

By Digital Nomads HubNovember 1, 2018 No Comments

What does it take to get from point A to point B? First, you have to know where point B is. Second, you must have a way to get there.

But what if point B is becoming rich and your point A isn’t anywhere close to being wealthy? The two steps still work. You’ll need to figure out exactly what becoming rich means to you — where your point B is. By the way, it will vary for different people. The good news is that there are several ways to become rich. Historically, one of the best methods is to invest in stocks.

The obvious question, though, is: Which stocks are good picks to travel the road to riches? Again, there are plenty of solid alternatives. Three that especially look promising in my view are MongoDB (NASDAQ:MDB), NVIDIA (NASDAQ:NVDA), and Welltower (NYSE:WELL). Here’s why these three stocks could make you rich. 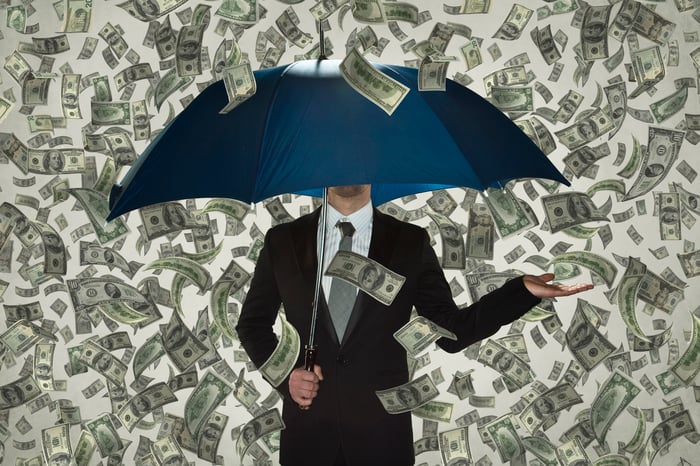 One of the stocks that I personally bought while the market fell over the last few weeks was MongoDB. If you’re looking for a potential hot ticket to wealth, MongoDB could be right up your alley, too.

MongoDB markets a database platform designed for today’s world. The company’s revenue has skyrocketed over the last three years by a compound annual growth rate (CAGR) of 58%. And that growth came organically rather than through acquisitions. What I especially like about this revenue is that it’s recurring. Customers don’t buy MongoDB’s products outright; they subscribe to them.

Most databases used by organizations were designed decades ago for storing and retrieving structured data (like rows and columns in a spreadsheet) and were built for on-site operations. MongoDB’s database was built from the ground up for both structured and unstructured data to be stored and accessed anywhere, including on-site or in the cloud.

The overall global database market is projected to top $63 billion by 2020. MongoDB’s revenue will probably total around $230 million this year. The company has a huge opportunity for growth — one that I think it can capitalize on.

NVIDIA stands at the center of two fast-growing markets: gaming and artificial intelligence (AI). The most important business for the company continues to be in gaming. NVIDIA’s graphics processing units (GPUs) and systems-on-a-chip (SoCs) that integrate a graphics processor along with CPU cores and other components generated $5.5 billion in fiscal year 2018, roughly 57% of total revenue.

Gaming remains a strong growth driver for NVIDIA. Graphically intensive 3D games have become increasingly popular, driving demand for the company’s GPUs. NVIDIA continues to roll out new technology to stay at the forefront of the industry, including its Max-Q technology used in gaming laptops.

Artificial intelligence presents another tremendous growth market for NVIDIA. Actually, there are several AI markets the company is focusing on, including powering datacenter servers that increasingly use AI or host AI applications, self-driving cars, and robotics.

Thanks to the recent market pullback, NVIDIA stock is cheaper than it’s been in months. I think NVIDIA will rebound strongly, giving investors buying now a nice opportunity for quick gains. But investors who buy and hold on to NVIDIA for the long run should enjoy the most success.

But Welltower could be like the tortoise in the tortoise and the hare fable. The company has solid long-term growth prospects as the U.S. population ages. This demographic trend will increase the demand for senior housing, memory care, and other healthcare facilities that are in Welltower’s sweet spot.

Welltower’s business strategy is to focus on premier markets with high barriers to entry. This gives the company better opportunities for growth, as well as a solid moat.

While investors might have to wait a bit on Welltower’s growth to really pick up steam, they don’t have to wait on its dividend. The company’s dividend currently yields over 5.3%, making Welltower one of the most attractive high-yield dividend stocks on the market, in my view. With this strong dividend and its solid growth prospects, Welltower should make investors rich — albeit slowly.

My portfolio includes two of the stocks mentioned — MongoDB and NVIDIA. I liked these stocks for a long time before I bought either of them. And I’ve kicked myself for waiting so long.

You might look at the uncertainty in the stock market and think it’s better to hold off on investing. I suspect you’ll regret it if you do. Whether you like these three stocks or have other ideas, the most important step to becoming rich is stepping out.